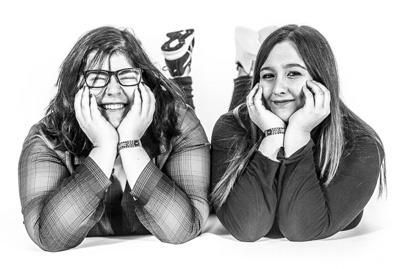 Kerry contacted us to book a photoshoot gift voucher and vocal recording gift experience for her daughters' 18th birthday, wanting to take advantage of a full day of fun and creativity, opting for a combined package with both a photoshoot and recording session on the same day.

The family party arrived, Jen, who's treat it was, had brought along her best friend to share in the experience.
I was good to go, with a full white background, lit and with test shots already done. My first job was to make the girls feel welcome and at ease. It would be difficult to rush them straight into the shoot, so after much giggling and shyness I offerd them a photographic book to look through containing over 1000 model poses.. This was to start getting them into it. After coffee's had been drunk and some more easing chat, we were ready.

I like to start with full body on a blown out white background, then closing down for portrait head shots. After a bit of shyness and with plenty of encouragement from her mum and dad Jen started to feel more comfortable. We also shot a few images with her friend, brother and parents. Once the on-white shots were done I started to close the aperture for a few on a feathered grey.

After a swift change of the background from the ceiling, curved along the floor photographic white paper to a full width black sheet and 4 floor to ceiling black polystyrene flags, I started the shoot with Jen sitting and a single flash into a soft-box perched high to her left. On the right I pulled up a trusty new friend, an led bank of some 50 mini bulbs that I can control the output of with a simple dial. The led's job is to be angled quite low and fill in some of the shadows the flash will fail to illuminate from its position, getting a nice balance where there is shadow but features can still be made out, giving the image some contrast.
The next set of pictures were the same position and set-up but I added an additional lit soft-box behind Jen to the right. This pulled her off the background and gave a nice glow to her hair, pulling out the chestnut colour and adding dynamics to the shots.

To add some more variety we went outside, here at the studio. Certainly not ideal at 1pm but nevertheless we got some nice additional shots of both Jen and with her friend.

See it as it happens - Tethered Photography

All the studio session was shot tethered to Lightroom, so files are transmitted to a 28" mac screen in seconds.. This is great as it really boosts the confidence of the model and also gives them ideas on where to improve their posture or gaze.

Pix Done.. Now for some recording!

Following some lunch I dismantled the photography set-up, which in addition to booting up the audio set-up takes about 15 minutes.. While I did this the party got a chance to sit at the computer and 'star' the pictures they favoured.

I'd been in touch with Jen prior to the session to see what songs she wanted to sing. I always encourage vocalists to make that decision as early as possible so they can have a good practice before they come to the recording studio.

A new template and the backing tracks were made the night before, so the session could commence with ease when Jen was ready. A bit of dimming of the lights and a few run through's commenced. When ready Jen got stuck into the first song.. So did her dad! booting the male hook parts out, fair play we'd do anything for our daughter wouldn't we, he did a cracking job.
We went through the song replacing any suspect parts to get a version everyone was happy with.
The second song was sung by both Jen and her friend, taking different verses each.
So, then some eq, compression, sexy reverb/delay on the vocals and a swift-ish master the songs were exported and a couple of CD's were burned.. Played all the way home in the car no doubt!

This photography experience package would normally have included 10 digital downloads, however due to the combined package of both recording and photoshoot, I included 20 refined digital files.
So, including the pictures chosen by Jen, friend and family I chose further one's I knew would work well either cropped or 'spiced up' and set to work on putting the correction and punch into 51 photographs.
These were uploaded to a password protected gallery for downloading at leisure, with the shopping cart set to allow 20 free digital high resolution downloads + further options to order prints in a variety of sizes (cropping by you in the system if required) canvases, metals. Additional digital files above the 20 included are just a tenner each and can be bought from the gallery cart.

5 stars
We have just had the best day here with Cian helping my daughter celebrate a belated 18th birthday by recording 2 songs and having a photo shoot. Cannot recommend highly enough! Very professional, patient and able to put everyone at ease and feel comfortable! Many, many thanks!